Powwownow – Up for a Three-way 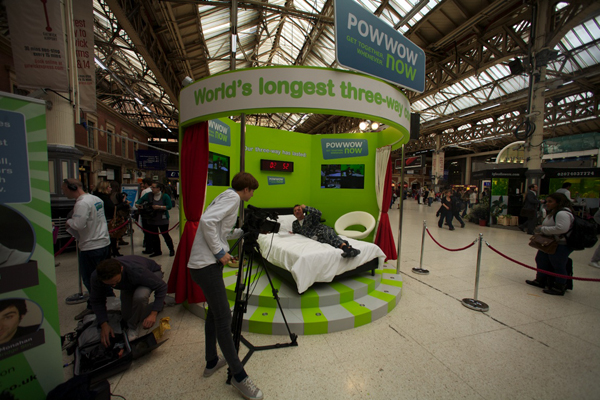 Powwownow was founded in 2004, offering customers low-cost conference calling facilities with the ethos of no booking, no billing, no fuss.

Powwownow is Europe’s fastest growing free conference call provider and operates in 15 countries including the UK, US and major European markets.

Powwownow tasked Hotcow with creating a campaign that would help raise awareness of the brand and its low cost service offering, whilst driving people to the Powwownow website.

Many businesses are spending huge amounts of money on business travel, when a large proportion of meetings can be done via a conference call.

The institute of Travel and Meetings place the UK’s annual spend on travel at £24 billion.

Most business to business communications is based on rational brand messages making it difficult to stand out from other competitors.

We developed an integrated campaign asking people if they are ‘Up For A Three-Way’.

The campaign was developed to break through cluttered, static brand messages and inspired people to find out more.

The campaign was centred around achieving a world record for the longest ever three-way conference call . A full 24 hours of non-stop talking with 3 celebrities in 3 bed booths at 3 major London train stations – highlighting to business travellers that you can have a conference call anywhere, even in bed! Three Celebrities were challenged to complete the task – ex-cricketer Phil Tufnell, glamour model Jodie Marsh and comedian Patrick Monahan. The celebrities were chosen based on celebrity status and their ability to talk for England.

The public were invited to go online and watch a live feed of the event on a designated micro-site and get involved by asking questions or presenting topics for our celebrities to talk about! As well as this, people could interact with the celebrities via Twitter, Facebook and through a messaging system on the microsite – making “Up for a Three-Way a truly integrated campaign!

In a reality style manner, Live interviews with radio and press took place on the beds.

Social media, online advertising, PR and radio were all used to generate pre-event “Join us for a three-way” awareness.

To give the brand ongoing credibility the post campaign message was centred around highlighting that Powwownow is the greatest free conference calling service in the UK. Utilising social media, online advertising, PR, Radio and street teams to reinforce the message.

The event was a great success with a huge amount of publicity and talkability.

Hotcow pulled out all the stops and delivered a brilliant creative concept that we were all extremely pleased with.
Casey Williams, Marketing Manager