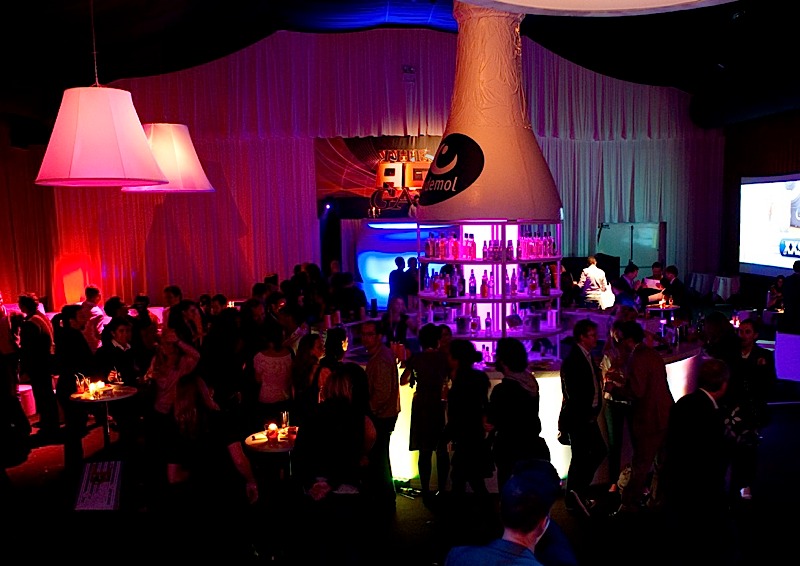 Endemol is an international production and distribution company with a head office in the Netherlands. They produce digital and television entertainment shows and are responsible for some of the most successful reality-based entertainment TV show formats in recent years, the most famous of these being Big Brother.

MIPTV in Cannes, France, is the world’s leading TV entertainment content market, with programme buyers from all over the world attending the event to get a taste of, and buy the newest programmes, freshest formats and latest innovations for TV and other video-rich platforms.

Each year Endemol aim to be the most talked about production company by providing stand-out experiences and media to sell their programs.

Hotcow was tasked with creating a party with a huge ‘WOW factor’ aimed at buyers from around the world that would allow them to ‘experience’ four of Endemol’s key new programme titles – The Marriage Ref, 101 Ways To Leave A Gameshow, The Age Game and Xtra Xtra Small.

As programme buyers come from all over the world, we needed to bypass potential language barriers by focussing on creating a visually stimulating environment that would fully engage a buyer of any nationality.

We created an experience that enabled party guests to immerse themselves in the four programmes by putting them in the ‘spotlight’.

Each show had its own relevant, engaging experience to make the party a fun, exciting and visually memorable experience.

Xtra Xtra Small (XXS) is a show where ordinary chores become a colossal task as competitors look to complete an obstacle course 100 times the size of real life. We created a giant 6m x 2m sofa where people could get their photo taken by a giant polaroid camera and receive a giant photo immediately after.

‘The Marriage Ref’ was Jerry Seinfield’s new show where he ‘refereed’ warring couples. We created a cocktail bar with a difference, with an oversized 2m x 6m Endemol branded bottle drawing awareness to the bar where people could order cocktails along the ‘Marriage Ref’ theme, such as a “slap in the face”. Bar flairers not only made the drinks but acted them out and engaged in banter with customers. Referee’s whistles also kept people on their toes and drummed up a buzz.

‘101 Ways To Leave A Gameshow’ is a show based on 101 ways of being ejected from a gameshow, with a fear factor emerging by not knowing if you are going to be ejected or not. We created an area where the guests could feel the anticipation and atmosphere of the gameshow as they entered and exited the party. This included a dark corridor with intense sounds from people yelling and screaming as they were being ejected from the gameshow, as well as showing off ejected victims of the show in the form of mannequins and actors.

‘The Age Game’ is a show that revolves around guessing the age of people or objects where the least accurate contestants are eliminated after each round. We created a game-card to be handed out where party-goers had to match a picture of a person to an object based on their age. Competitors handed their completed cards in and two people were announced as winners of the newly-released ipad at the end of the evening.

Over 673 guests attended the party and 293 of these jumped around on the giant sofa!

Cannes was buzzing with party talk and antics, having a knock-on effect on people visiting the exhibition in the following days. Sales interest increased by 27%.

The party received a nomination for the FMBE awards 2010 in the “Best Business to Business Activity” category.

“The massive sofa was awesome!”

“The whole experience from start to finish was very exciting”

“So much better than the normal party format”

“The Age Game is so much harder than it appears!”

“I got a slap in the face from the bar staff – what a shock! Something I will definitely remember!”

If you can laugh together, you can work together! The Hotcow team are fun, professional and transparent – key ingredients to get a creative partnership.
Head of Marketing and Research, Endemol Entertainment.