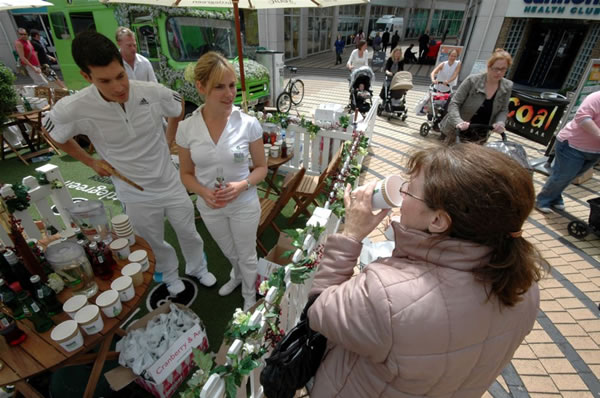 Bottlegreen drinks first started bottling the “taste of the English countryside” in 1989 when the husband and wife founders began producing their flagship product, Elderflower Cordial. Within a year of selling the cordial at local farmer’s markets they struck a deal with Waitrose in a trade partnership that has lasted to this day.

Today, the brand produces 18,000,000 bottles of their 21 products, selling in retailers across the UK.

Despite their exposure, Bottlegreen had suffered from generally low brand recognition despite achieving high levels of consumer satisfaction, retention and loyalty among an ABC1 audience.

Bottlegreen approached Hotcow to promote the Bottlegreen brand to a wider female audience, to increase the recognition between the product name and the brand while driving trial of their entire range of flavours.

Bottlegreen had great customer satisfaction, retention and loyalty from its existing ABC1 customers. Everyone who tasted the product loved it but spreading word-of-mouth was difficult as most people couldn’t remember the name of the brand. People loved the natural flavours and the quintessentially British feel of the overall brand.

Our research told us that within the target demographic, women accounted for 80% of household purchasing decisions. To combat its low brand recognition, we needed to create a highly targeted brand experience that would emotionally engage these potential new loyalists, in order to get them talking about the brand within their community.

We devised “The Great British Taste Summer Tour”. A roadshow that would tap in to the ABC1 target audience by visiting quintessentially British events such as Wimbledon, the Stella Artois Championship, the Henley Regatta and The Edinburgh Fringe.

We created a stylised Bottlegreen Ice Cream van to tour the country and install itself at key locations near each event. The van sat in an inviting custom-built, pop-up British garden setting. From this base our promotional staff, in traditional British dress and trained to play the part of a stereotypical English person, were on hand to encourage trial of the various Bottlegreen flavours and give them more information about the brand and its offerings. To amplify the stationary installations we also had staff riding around on branded bikes targeting people in the wider area to hand out samples to.

At the tennis events we visited, we employed a Tim Henman lookalike to support the brand and drum up buzz around the activity which helped to drive the “Britishness” of the creative message. At each location we visited we deployed ambient advertising, local and national PR tie-ins and a competition where people could win tickets to an array of British sporting events, long weekend luxury breaks and picnic hampers.

We have been thrilled with the finished article of the vehicle design and it has been so well received by the public, and the sampling has gone down a storm. A big thank you to the whole Hotcow team for all your hard work and efforts.
Clarion Communications