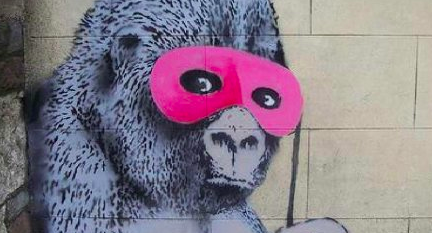 Brands and agencies are constantly getting more creative in their advertising tactics leaving a lot of examples as inspiration for other marketers around the world. Over the years, guerrilla marketing has proven a valuable tactic to catch people off-guard and cause an emotional response. Feelings of happiness, shock, sadness and humour are great sellers, and one of the main advantages of guerrilla campaigns is that it is unexpected.

Because many companies have been trying to jump on the guerrilla bandwagon some efforts have become increasingly outlandish and questionable. This type of marketing does involve lots of time, energy and imagination to make it right. So have a look at our selection of the top ten guerrilla campaigns in the last ten years below.

This guerrilla activity took street side advertising to a whole new level. Booty Call was a new butt-building fitness class being hosted at the New York Health & Racquet Club. To promote the new class, group of scantily-clad guys and girls showcased their butts with the words “Booty Call” printed on them. 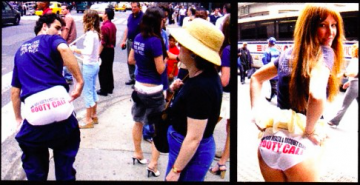 The baggage carousel is a place where travellers are forced to wait. Thinking about this, Absolut Vodka placed a carton with their bottles on a carousel at Amsterdam Airport while travellers were awaiting for their bags. The campaign certainly proved tempting for those people, who were clearly to know what was inside.

German online recruitment website Jobsintown.de ran a print campaign placed in a variety of machines with the slogan “Life’s too short for the wrong job”. The concept of the advertising campaign was to introduce an imaginative depiction of miserable working conditions that some people may have. 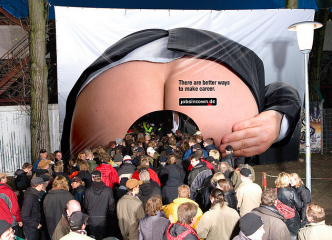 Sometimes guerrilla stunts can flop and ultimately become a PR nightmare. This was the case of the famous 2007 Boston Bomb Scare caused by Turner Broadcasting in January 2007. What started off as a guerrilla marketing campaign to promote Cartoon Network show called Aqua Teen Hunger Force, turned into a citywide bomb scare. The channel placed battery-powered LED placards resembling the ‘Mooninite’ character on the cartoon show in random locations throughout Boston, Massachusetts and the surrounding cities. At night the devices lit up to show the ‘Mooninite’ character putting up his middle finger. The placards resembled some characteristics of explosive devices and soon caused the scare. We can’t deny that it attracted huge publicity to the show, and once you take the emotion out of it, it was a really innovative campaign. 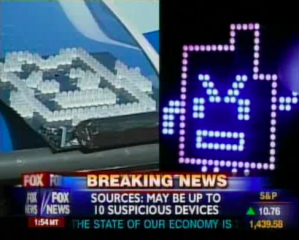 Effective ads don’t always demand a big budget. The installation for 3M Security Glass uses just $500 in “real” currency but looks to be much, much more. The impression was strengthened by posting a security guard at the site, just to prevent anyone from attacking the display with a tire iron. Use of the hands and feet was allowed and the artful ad reportedly could take a kicking and keep on tricking. 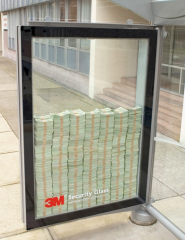 UNICEF set up an unusual water vending machine on the street of New York advertising dirty water. With choices of malaria, cholera and typhoid-flavoured “Dirty Water,” the UNICEF staffers then got the message across that $1 is enough to ensure a child gets access to clean water for 40 days — a simply bottled message that saw the donations roll in. It was a clever way to convey an issue, confronting those that live a life of luxury with stark realities from other parts of the world.

Tropicana ran a campaign in Canada’s Arctic North that provided residents of the remote town of Inuvik with an artificial sun for one month of their winter – a season that ordinarily brings no sun whatsoever due to its Arctic location. Lights were fixed to a 36 foot-wide helium balloon which rose up to illuminate the town every morning, giving locals something they had never seen before – a sunrise in winter. Now that is memorable!

The specialised magazine Golf Digest came up with an exceptional guerrilla stunt to promote the publication at the Dubai Desert Classic, one of the biggest Golf event in the United Arab Emirates. To remind golf enthusiasts where they could keep updated with golf news and techniques used by professionals, the magazine designed stickers with half golf balls attached and went around the parking area of the event ambushing car windows. The stickers created an amazing look as if the golf balls had really cracked the windows.

This clever anti-smoking guerrilla campaign created for the Thai Health Foundation is simple in its execution, yet reveals a powerful message.The campaign went viral showing adults standing around taking a cigarette break. When a child approaches them asking to borrow a lighter, shocked smokers then begin a speech about the evils of smoking. After all the ‘smoking is bad for you’ chat, the child asks: “So why are you smoking”? before handing them a folded note and walking away. A close-up on the note reveals the message: “You worry about me, but why not about yourself”?

To promote its services, Fuzz Wax Bar created a fun and interactive street event campaign. The company hired a male model to wear nothing but waxing strips all over his body with the words “pull” on them. He then went out on the street and immediately caught people’s attention. He encouraged onlookers to pull any strip off his body, regardless of how much waxing hurts. The people who pulled off a strip realised that it was actually a coupon, which they could get 25% off their next visit at Fuzz Wax Bar!

MINI created a fun guerrilla campaign by converting three Mini Cooper S into roller coaster carts. They then took onto the streets of Toronto, with screaming riders pretending as if they were riding on a roller coaster. The campaign got some good reactions as onlookers took their phones out to take pictures and capture the stunt.

What was the best guerrilla marketing effort of your favourite brand? Feel free to send us examples. Tweet us @Hotcow! 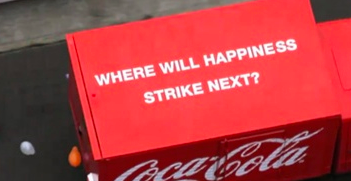 Why are more brands turning to Guerrilla Marketing?

Why are more brands turning to Guerrilla Marketing?