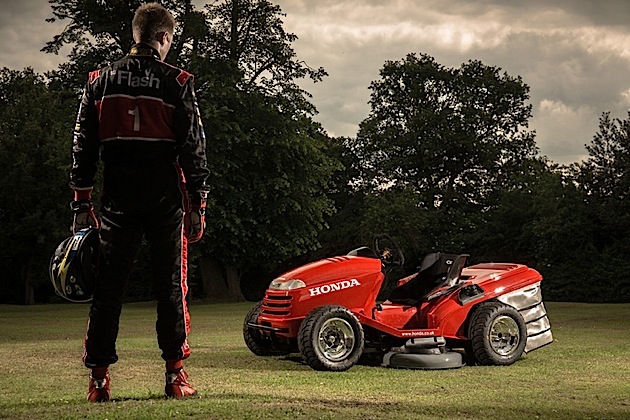 Honda and the Mean Mower – marketing with a difference.

Honda thought of a clever way to promote their innovative nature recently. Instead of using tired marketing techniques, over-used slogans or saturating the social media scene, they applied their magic to something that’s in every garden shed: a lawnmower.

In a nutshell, what they did was design and build a special engine to fit in an existing lawnmower.  The result was that they developed a lawnmower that could reach speeds of up to 130mph.

That in itself was a pretty cool PR stunt that caused quite a stir, but the campaign gained more attention when the lawnmower – called The Mean Mower – entered the Guinness World Records as the world’s fastest lawnmower. Honda enjoyed lots of social media shares, as well as coverage in places such as The Metro, Mashable, Daily Mail Online and the Evening Standard.

It was a slick campaign – it’s over simplifying the project to suggest it was just about an engine in a lawnmower. In fact, the infrastructure had to be intricately designed. The Mean Mower is strong, safe and light. Design-wise it was always intended to look as much like the original mower as possible. It’s got a 1000cc engine, bespoke suspension and wheels from an ATV. It’s got a high capacity oil cooler and a secondary water cooling radiator. And, of course, it cuts grass very, very efficiently. If that wasn’t impressive enough, the Mean Mower entered the record books by beating the previous record by 30mph.

Honda’s original brief was to create something that could demonstrate their spirit of innovation, but it ended up doing so much more. The surrounding stories from the campaign allowed Honda to show that they make much more than just cars. And, because the lawnmower’s engine was akin to that of a very powerful motorbike, they were also able to talk about their motorsport heritage.

Such was the popularity of the invention, there are plenty of plans in store for the Mean Mower – this is just the start of the journey. From a marketing and PR perspective, it shows the power of lateral thinking. Why not look at your core beliefs and talents, and see if they can be applied to something in the everyday world? You too could cause a stir.

Guerrilla marketing – how to make a lasting impression.

Guerrilla marketing – how to make a lasting impression.